Andrea Pirlo and ex-Chelsea boss Maurizio Sarri are both contenders for the Everton job, with the former supposedly in talks with owner Farhad Moshiri. (Calciomercato, in Italian)

Aston Villa and England midfielder Jack Grealish, 25, could stay at the club this summer, with both Manchester City and Manchester United unwilling to match Villa’s £130m valuation, according to ex-Villa captain Gabriel Agbonlahor. (Talksport)

Manchester City and Brazil midfielder Fernandinho, 36, and Newcastle and England striker Andy Carroll, 32, have both been included on their club’s released list which was published by the Premier League. However, clubs have until 23 June to send their final list. (Premier League)

Manchester City are, however, closing in on the signing of 18-year-old Fluminense midfielder Metinho, who is known as the “Brazilian Paul Pogba”. (Goal)

Chelsea have not ruled out selling Morocco winger Hakim Ziyech this summer with Serie A sides AC Milan and Napoli both interested if the 28-year-old became available. (Calciomercato – in Italian)

Everton‘s players were in “complete shock” when they found out manager Carlo Ancelotti was returning to Real Madrid, with Brazil forward Richarlison, 24, and Colombia playmaker James Rodriguez, 29, both now considering their future at the club. (The Athletic, subscription required)

Meanwhile, Arsenal will exercise an extension clause in 22-year-old French midfielder Matteo Guendouzi’s contract if Marseille do not increase their £8.6m bid. (Le10 Sport, in French)

Everton and West Ham are interested in Lazio and Argentina forward Joaquin Correa, 26, with the Italian side willing to negotiate for around £30m to help fund new signings. (Italy24News)

Liverpool are looking to sell Serbia midfielder Marko Grujic this summer, with Hertha Berlin, where the 25-year-old spent two years on loan between 2018 and 2020, interested now his asking price has dropped to 14m euros (£12m). (Berliner Kurier, in German)

Bayern Munich’s contract talks with French winger Kingsley Coman have stalled with the 24-year-old wanting 20m Euros per year, leading to him instructing his agent to see if any Premier League clubs are interested. (Sport 1, in German)

Barcelona and Bosnia midfielder Miralem Pjanic, 31, could rejoin Juventus this summer after conversations with Massimiliano Allegri, who is set to take over after Andrea Pirlo was sacked. (Calciomercato – in Italian)

Meanwhile, Barcelona are set to complete the signing of Lyon and Netherlands forward Memphis Depay, 27, on a three-year contract. (Sport)

Luis Campos, former sports advisor at Monaco and Lille, has turned down a switch to Nice amid talks with Arsenal and Real Madrid. (RMC Sport, in French)

Brazil‘s European-based players, including those from Manchester United, Liverpool and Chelsea, have “delayed training” at the Copa America, with Brazil considering whether to quit the tournament that is due to start on 13 June. (Mirror) 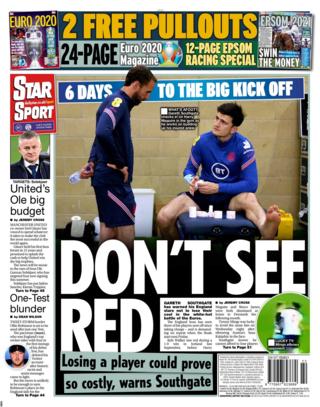